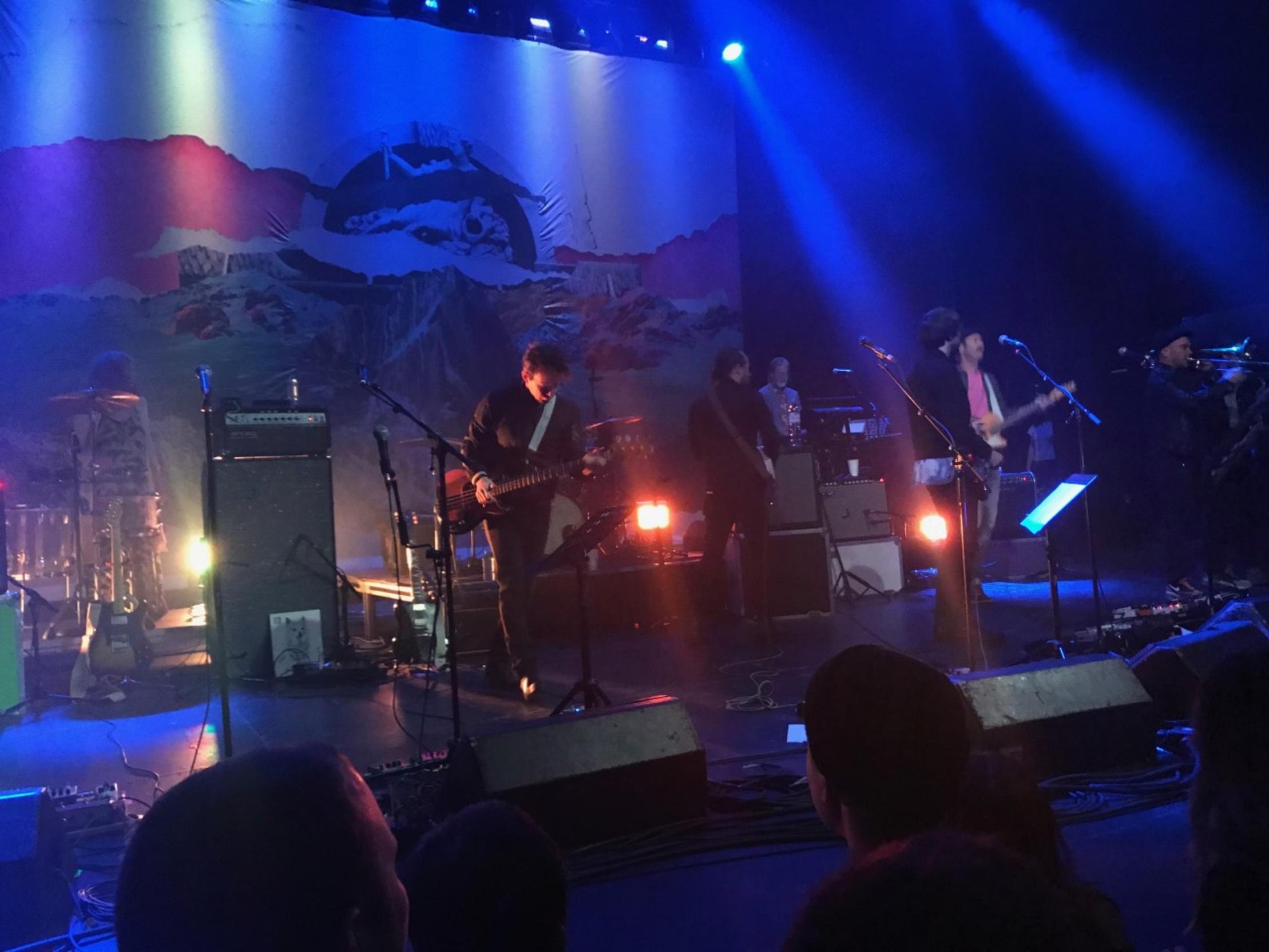 Toronto indie rock heroes Broken Social Scene are back in action. The band have released a
pair of EPs (Let’s Try the After, vol 1 & vol 2) already this year and starting next month they will
be hitting the road for a number of headline and festival appearances in both North America
and Europe. But before all of that activity gets underway BSS had the task of performing two
hometown shows at the stately Danforth Music Hall.

This night (April 25th) was the second of the two, so the real question going in was were they
sticking to a particular set or were whole sale changes going to be made. That question was
answered immediately with the opening chords of “Pacific Theme”, one of several very
necessary instrumentals from the seminal You Forgot it in People. Unfortunately, during this
opening track Kevin Drew’s amp died and the band had to kill the next ten minutes with an
impromptu jam…Brendan Canning acting as musical conductor: “Can we have a beat please,
Justin” / “Can we have some bass, Charles?”…”Can we have a less funky bass, Charles?”
With Drew’s new amp up and running, the band kicked back in with the Canning-sung “Stars
and Sons”…Charles Spearin handling the magnificent bass lines, while Canning noodled a
Fender Jaguar.

The Let’s Try the After EPs were given a spin with the playing of Andrew Whiteman’s “All I
Want”, Drew’s urgent and pleading “Can’t Find My Heart” and “Boyfriends”, the latter of which
was sung with the able assistance of Ariel Engel.

With Feist (and BSS old boy Jason Collett) now on-board, the time was ripe for another You
Forgot it gem: the euphoric “Almost Crimes.” The chorus of said number seemingly included all
eleven members and all of them were wearing wild smiles as they belted it out.
Another alum, Lisa Lobsinger, joined the party to reprise her lead vocals on the meandering
Forgiveness Rock Record track, “All to All.” Lobsinger hung around to add backing vocals to
numerous other songs throughout the night as well.

“Hotel”, the self-titled record’s rarely played cut, received a deliciously groovy rendition, while
“Halfway Home” and “World Sick” went for the jugular with there anthemic qualities.
The encore was a nostalgic affair with the band breaking out Feel Good Lost’s “Passport
Radio” and the You Forgot it in People tearjerker “Lover’s Spit”. It was just like the old days
again with Feist and Drew taking control of the proceedings with their undeniable chemistry.
They clearly wanted to keep playing, but the 11:00 curfew was the killjoy to any possibility of
that happening. A glance at the setlist says that “Big Couches”, “Guilty Cubicles”,
“Superconnected”, and “Meet Me in the Basement” were all victims of the time constraints.

Every BBS show feels like an epic homecoming or maybe a grand finale, but that’s the very
thing that keeps this band so vital. In the press release for Let’s Try the After, Drew made the
point that this new music is all about picking up the pieces and moving on: trying the after, if
you will. Is Hug of Thunder or Let’s Try the After the band’s finest work…for me it’s not. But are
they continuing to push on and find the way forward as a band, as a family? You’re damn right!
One of rock’s truly inspiring live acts!