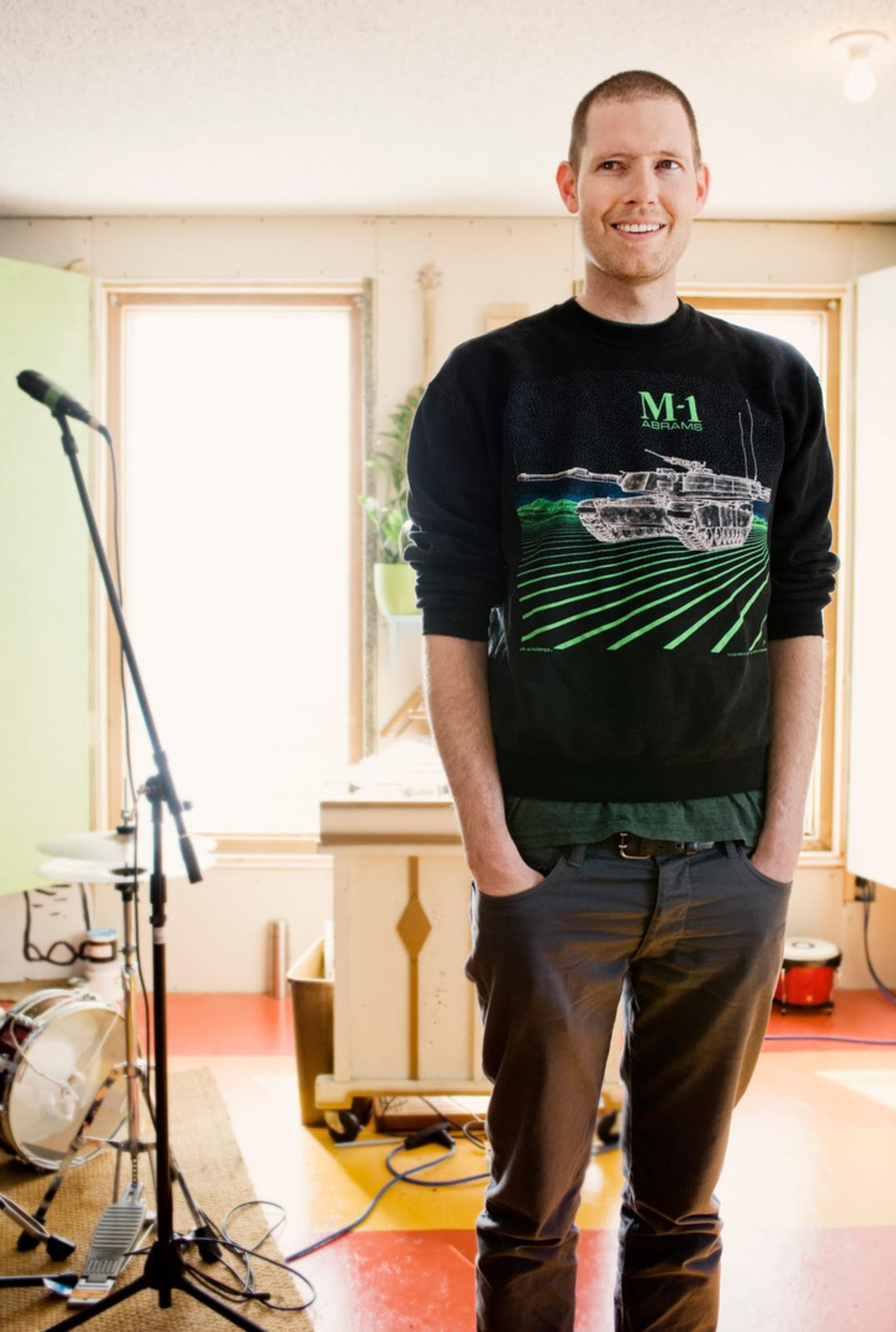 Chad VanGaalen has never lacked for things to do. The musician / illustrator / film maker / producer, and all around good guy, has always got something on the go. He will even renovate the house, when time allows. This past year saw the Calgarian release Diaper Island; his fourth, and in my opinion, best record to date. He has directed videos for himself and Sub Pop label mate, Dinosaur Jr’s J Mascis, as well as finding time to tour the new album in Europe and North America.

Diaper Island builds on the career momentum created off of the Polaris Prize-nominated Soft Airplane from 2008. The album has a more assured rock sound, yet still maintaining that ‘made in the bedroom’ feel that VanGaalen has become known for.

Chad took a few minutes out of his busy schedule to talk with chorusVERSEchorus about: Sub Pop Records, Ridley Scott films and the rebirth of the cassette tape.


Diaper Island is your fourth release on Sub Pop. How did you come to sign with them in the first place?

When Infiniteheart was put out by Flemish Eye Records; Secretly Canadian, Arts & Crafts and Sub Pop were all interested in signing me, but Sub Pop was the one that let me have full creative control. I told them I wasn’t interested in touring and they said “Ok. That’s weird, but ok”. Eventually they convinced me to tour though. I feel like they are the best label ever…kind of a dream come true.

So they are treating you well then?

Oh Yeah. Every time they put out a record of mine, I say “are you guys sure you want to put this out?” They always tell me” what are talking about? Of course”.

You are not just a musician, but an illustrator and animator as well. Has anyone asked you to score a film?

I’ve had offers. There is a movie that may come out called ‘Beyond Apollo’, but they are waiting on funding for its release. I have lent my songs out to films in the past though.

I would like to score a super- minimal Sci-Fi film, like ‘Moon’. That would be a dream come true for me.

You mentioned ‘Moon’; are there other films or directors you are particularly inspired by?

Ridley Scott, definitely. I watch the ‘Director’s Cut’ of ‘Alien’ and ‘Blade Runner’ on a daily basis. District Nine is another good one. I also love animated 70s films, like ‘Fantastic Planet’, I am a Sci-Fi geek.

You write, record and perform all by yourself in the studio; how do you know if you have got something that is good or not? Do you have somebody to bounce ideas off of?

That is a weak link for me. I like to make mix-tapes for my friends of the stuff that I am working on. Usually, I hear back from them a month later and they will say things like:” what the fuck is this?”, or, “this is so embarrassing…never show this to anybody”.

I definitely use my friends and family to give me the real word on what’s happening.

Staying on the theme of working from home, do you find you need a routine to get work done? Maybe setting aside certain hours for certain projects?

Yeah, I find that winter is the best time for animating. Spring is when I tend to write and record most of my songs. I usually work from 9:30am to 5:00pm and then another block of hours between 9:00pm til 2:00 in the morning. In between, I try to work in some home renovations and play with my kids.

You have a label that is dedicated to cassette only releases. What was the genesis of that?

I can put the experimental stuff, which nobody wants to hear, out on the label. That satisfies an urge. Also, it was a means of collecting money and giving it to charity. The label will release some stuff in the new year, and all the proceeds that are collected online will go to charity. That was another main reason for starting the label…. it was a good excuse to give a bunch of money to someone that needs it.

Wow, that’s great. What charity will you donate to?

Probably The Jane Goodall Foundation. We might also do some sort of Somalian relief effort, just because it seems like that stuff is forgotten pretty quickly.

I will ask Ian Russell at Flemish Eye, who is an insane humanitarian and is just a good person all round, “what should we do?” and he will say, “Jane Goodall Foundation!”

Lets talk more about cassettes. It seems like the cassette has undergone some sort of career revival, it has retro cool. Thurston Moore (Sonic Youth) wrote that book a few years ago on mixtape culture, as well. What do you think of all this?

No one buys CDs anymore. The last couple of tours I have been on, I brought 500 tapes and the same number of CDs; by the third show I had sold out of the tapes and I probably sold 5 CDs on the whole tour. The tapes are paying for my gas.

I have a tape pro duplication studio in my basement, where I can master cassettes properly and make multiples quickly. I have been waiting years for the prices to drop on this equipment. I was able to buy a bunch of gear from this church in the southern U.S., and I had everything mailed to me a few months ago. I’m very excited.

I mentioned Thurston Moore earlier; your guitars have tunings that sound, to me, like Sonic Youth. Now, I am in no way a musician and could just be ta​lking out of my ass, but am I hearing that right?

I have tried a few different things, but I seem to keep coming back, to what I was later told, is an open C tuning. I have been stuck in it, for better or worse, for the last fifteen years. I am not that good of a guitar player and that tuning makes my chords sound prettier.

I keep thinking that I have found a new tuning and then my friends will say; “dude, that’s the same tuning, just an octave higher.” A couple months later, the same thing will happen all over again.

What are you currently listening to?

I have been listening to this great Flying Burrito Brothers record. Captain Beefheart’s ’Safe as Milk’, is another one. I’m always listening to these weirdo ‘krautrock’ records like Cluster, and there is this record by Ursula Bogner that I keep coming back to.

I have never heard of Ursula Bogner, who is she?

I don’t know if she actually exists! I think that some dude may have invented her as an excuse to put out his own, awesome synth music. There is this whole biography of her on the inside of the record sleeve.

Finally, with the release and touring cycle of Diaper Island behind you, what are your plans for 2012?

I plan to work on this animated film that I have started; I only have a minute and a half, so far. The tape label will release more stuff and I will try and fit in some home renovations.