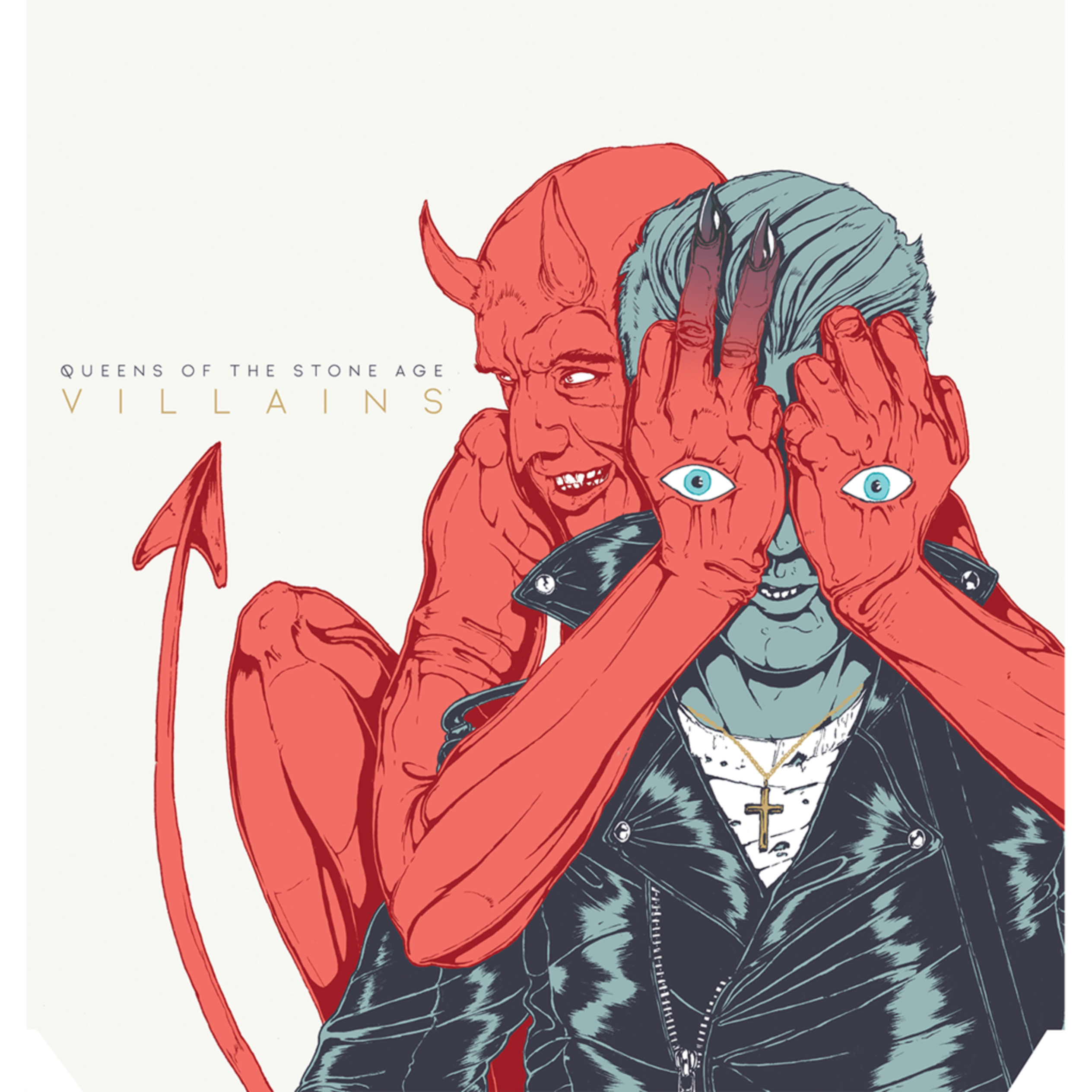 QUEENS OF THE STONE AGE - VILLAINS

It’s arguably 2017‘s most eagerly awaited rock record...and now it’s here! Of course, I’m
speaking of Queens of the Stone Age and their new LP, Villains. In a recent interview,
Queens of the Stone Age’s Josh Homme expressed his desire to have their last record,
2013‘s Like Clockwork, and it’s follow-up, to be something akin to Iggy Pop’s landmark
70’s records The Idiot and Lust for Life. Well, that follow-up has now seen the light of
day, and just as Homme promised, it is the counter-point to Like Clockwork’s point. Like
Clockwork was a record that was bathed in darkness, but Villains showcases a much
brighter side to Queens of the Stone Age....but make no mistake about it, Villains is very
much a Part 2 to Like Clockwork, in that it retains much of it’s sonic vibe. Though many
of the early reviews have been positive, Villains does seem to have divided the
fanbase. Much has been made of the fact that pop super-producer Mark Ronson
helmed the making of this record and it certainly seems to have had an impact on the
overall sound of the album, but it’s probably just as insightful to learn that the man who
helped shape Like Clockwork (Mark Rankin) was also involved on this one...ultimately,
it’s in the ear of the beholder whether that’s a good thing Ronson’s involved or not.

The album is comprised of nine songs and the great majority clock-in between the five
and six minute mark; the first of these is the rambunctious “Feet Don’t Fail Me”, a song
that sounds like something you would have found on the Them Crooked Vultures record
(remember that band with Homme, Grohl and John Paul fucking Jones?). “Feet Don’t
Fail Me” almost sounds like Homme’s mission statement; on it he declares: “I was born
in the desert / May 17 in ’73 / When the needle hit the groove / I commenced moving / I
was chasing what’s calling me.” All this plays out over top of claustrophobic guitar and
drums. A promising start and more typical present day-era sounding QOTSA.

The album’s first single, “The Way You Used To Do”, is the song that best typifies the
overall sound of Villains...and it’s most likely the song that will have as many detractors
as it does supporters. Undoubtedly a high-tempo number, what with all the handclaps
and ass-shaking, but there’s something amiss on “The Way You Used To Do.” It might
be the somewhat canned-sounding production (bass and drums have gone missing in
the mix for this one) or maybe it’s just the Top 40 pop chart nature of the song itself, but
this is not your older brother’s QOTSA.

“Domesticated Animals” steadies the ship with it’s rather basic (for them) chord
progression and crunchy production. Sounding somewhat like the Era Vulgaris track
“I’m Designer”, it builds from the simplistic guitar into an exploding funhouse of guitars
and gang vocals. You have to love the subtle (and not so subtle) guitar and synth
flourishes that both Troy Van Leeuwen and Dean Fertita bring to the band’s songs and
that is as present here as on almost every other cut on the record.

There is a reminder of Like Clockwork on the tender “Fortress.” Here Homme sounds
just as fragile as he did on that album’s “The Vampyre of Time and Memory” and “...Like
Clockwork.” As the song plays out over slick synths, Homme sings an ode to loved ones
with lines like “If ever your fortress caves / You’re always safe in mine / Come on
through.”

Things take a turn back to up-tempo with the psychobilly freakout of “Head Like a
Haunted House” and the swamp-boogie of “Un-Reborn Again.” Michael Shuman’s rapid
fire bassline leads the way with Homme spitting out lyrics faster than a coked-up
auctioneer... “Xanadus and xanadon’ts”; “Miss diagnosis a-with-a mostest”; and “The A,
B, Cs of leprosy” are just a few examples of the lyrical madness at work on this track.
“Un-Reborn Again” may not be as manic, but it still dwells in the same kind of zaniness
with it’s tale of how doomed the drug-addled and social media fiends will be in seeking
eternal youth. The band cheekily steals some melody and the “no hug-ee, no kiss-ee
until I get a wedding ring” line from The Georgia Satellites’ 1987 one hit wonder, “Keep
Your Hands To Yourself.”

The album’s centrepiece is the Led Zep inspired “The Evil Has Landed.” Clocking in at a
“Song For The Deaflike” six and a half minutes, the song travels a long and winding
road of Page-styled riffs and Bonham-sized drums before landing (pun intended) on a
outro that reminds of “Go With The Flow.” Supposedly, “Evil’s” signature riff has been
around for fifteen years but it was only recently that the band finally nailed down into
something concrete.

Queens of the Stone Age, I think it’s fair to say, has a clean track record to this point.
From Homme’s 1998 debut through 2002’s Songs For the Deaf, straight up to 2013’s
Like Clockwork, there is an admirable consistency and exploration in Homme’s music.
Villains continues that exploration and though it’s probably my least favourite Queens
record to date, I can hardly fault the him for making it. Sure, their have been numerous
line-up changes through the years and many still miss the punk rock wildness that
former bassist Nick Oliveri brought to the table, but this current incarnation, with the
exception of relative new recruit Jon Theodore, is actually celebrating it’s tenth
anniversary together and is firing on all cylinders. Homme’s vision for the band has
remained laser-focused and by doing so, Queens of the Stone Age has gradually
become one of the biggest rock bands in the world...and the world is a better place for
it!